What a truly incredible week it has  been here at Kwambili.

We were extremely spoilt with the discovery of a very special friend to the whole of Thornybush. His name is Marvin and he is a 13-year old male lion who was expelled from our northern pride some time ago and since then has been hiding from all (including us rangers) until on Wednesday 11 March this unbelievable specimen revealed himself once more. He has not just shown that he is alive but also that he can still feed himself, even with his quite severe injuries. This truly was a magical moment for everyone, not only at KwaMbili but the entire reserve. Good to see you so strong, old boy! 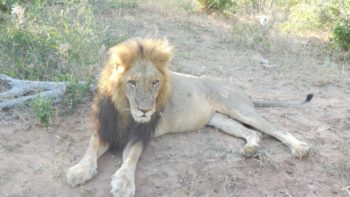 The treats did not just end there because believe it all not, there is more. The same day we saw Marvin we also ran into something that I do not think any of us expected to see – four Hyenas swimming in the dam. In all the years I have spent in reserves I have never seen this happen. It was a beautiful thing to see and – to make things even better – it was all in broad daylight. 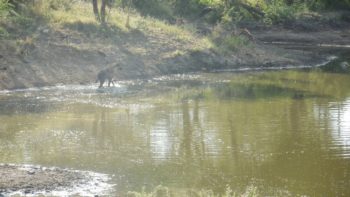