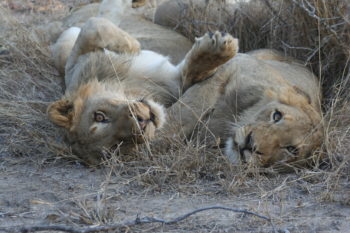 We stopped to view a pride of lions – our resident lioness with her offspring, 2 brothers and their sister. There is the old saying “brothers in arms” – well these two big guys took that saying a bit too seriously.

They had recently eaten so they weren’t very active. As we watched them they looked back at us with such inquisitive eyes it was unbelievable. It was as if they were questioning us as to why we were there staring at them. 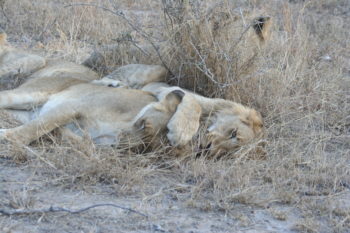 When they are slightly older they will leave their mother and will probably stay together, forming a formidable duo. For now they were calm and relaxed in our presence, and yet still so playful with each other, their sister and their mother – as one would expect among family!